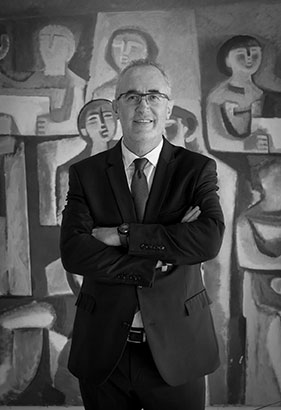 Since July 2015, he has been the director of the soloist and concert promoter “Ibermúsica,” which plans concert series in Madrid and Barcelona and organises tours of soloists and today’s top orchestras in Spain, Portugal, and Latin America.

In 1991, he founded the music publishing house “Tritó edicions,” through which he has published more than 4,000 titles in some 700 works, focused largely on the regeneration of musical heritage and contemporary Ibero-American music. He was the artistic director of the National Youth Orchestra of Spain (JONDE) from 1995 to 2001, establishing during this period strong ties with most of the national orchestras of other European countries, especially with the European Union Youth Orchestra and Mahler Youth Orchestra. At JONDE, he created the positions of “Assistant Director” and “Resident Composer,” which had a major influence on the careers of young Spanish musicians. For 30 years, he was also the general manager of the Cadaqués Orchestra, where he created the Cadaqués Orchestra International Conducting Competition, which awarded young conductors from 1992 to 2017. He also completed the PDG programme at IESE Business School in Barcelona.

Llorenç Caballero Pàmies was born in Barcelona, where he studied music before continuing his education at the Royal Conservatory of The Hague (Netherlands).